VICTORY GARDENS AT A GLANCE: 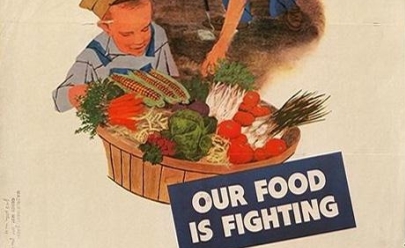 Download a printable version of this At A Glance

Back to WWII at a Glance

Student Travel – WWII Educational Tours
High school and college students, learn the leadership principles that helped win WWII on a trip to France or during a weeklong residential program in New Orleans. College credit is available, and space is limited.

See You Next Year! HS Yearbooks from WWII
Collected from across the United States, the words and pictures of these yearbooks present a new opportunity to experience the many challenges, setbacks and triumphs of the war through the eyes of America’s youth.

The Victory Gardens of WWII
Visit the Classroom Victory Garden Project website to learn about food production during WWII, find lesson plans and activities for elementary students, get tips for starting your own garden and try out simple Victory Garden recipes!

The Science and Technology of WWII
Visit our new interactive website to learn about wartime technical and scientific advances that forever changed our world. Incorporates STEM principles to use in the classroom.

Kids Corner: Fun and Games!
Make your own propaganda posters, test your memory, solve puzzles and more! Learn about World War II and have fun at the same time.