FOCUS ON: THE TUSKEGEE AIRMEN: 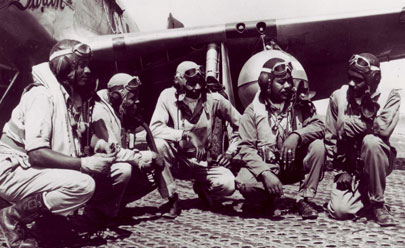 Between 1941 and 1946, roughly 1,000 black pilots were trained at a segregated air base in Tuskegee, Alabama. The most famous of the Tuskegee Airmen were the 332nd Fighter Group, also known as the “Red Tails” for the distinctive markings of their planes. The 99th Pursuit Squadron, later renamed the 99th Fighter Squadron, also distinguished themselves in combat. Together they flew more than 15,000 sorties and lost 66 men in the line of duty. Additional units, the 477th Bombardment Group and the 553rd Fighter Replacement Training Squadron, were activated during the war, but did not see combat.

The Museum’s US Freedom Pavilion: The Boeing Center features a restored P-51 Mustang painted with the Red Tails markings of the 332nd Fighter Group.

Images from the National Archives:

From the collection of oral histories at The National WWII Museum, listen to Charles McGee, William Holloman, John Leahr and Calvin Moret of Red Tails fame and Tuskegee graduate Calvin Moret describe their experiences as members of the Tuskegee Airmen.

Learn More with Items from the Museum Store:

Proceeds from the purchase of these items fund the continuing educational mission of the Museum in New Orleans.